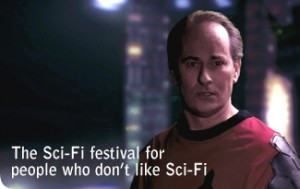 When I created The Genre Traveler, one of my primary motivations was that there was no single resource for genre travel info available (and there still isn’t). Well, “because there wasn’t one” is also the inspiration for the Sci-Fi London Film Festival, now in its 9th year.

“The festival started primarily because there wasn’t anywhere for low-budget, interesting or foreign science fiction films,” says the Festival’s director Louis Savy. “Its purpose was to show films that you’re not likely to see in the UK at all, or that are going to be difficult to get hold of.”

The event has become to be internationally recognized as a launch pad for genre movies. This year, the event will take place April 28 through May 3 at The Apollo Piccadilly Circus Cinema, LondonÃ¢â‚¬â„¢s most luxurious cinema.

Alongside their regular film programming (which includes shorts, features, documentaries and world premieres) they will be featuring a series of talks and debates on genre literature, film and TV. They have also expanded their “Science Fact” stream with demonstrations, lectures and debate.

Good for the whole family, the festival expects around 4,500 visitors in April.

I browsed their website, www.sci-fi-london.com, and couldn’t find a list of film expected to screen this year. If you find it, please do share in the comments below.