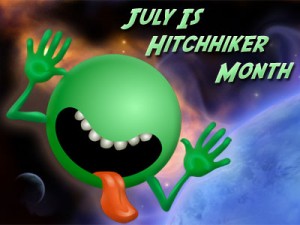 July is Hitchhiker’s Month, so I thought it would be a good time to honor the late Douglas Adams and pay tribute to his work.

Born in March 1952, Adams was best known for his popular creation, The Hitchhiker’s Guide to the Galaxy (HHGG). Telling the story of a rather ordinary human thrust into a rather extraordinary adventure, HHGG got it’s start as a BBC Radio 4 series, first airing in March 1978.

Since that time, the story has been transformed into a trilogy of five novels, a TV miniseries, a record album, a computer game, several stage adaptations and a feature film.

Although it is not the only universe Adams created (I’m quite partial to the Dirk Gently novels), HHGG seems to be the most popular and successful.

In more than 50 years of the Hugos, the highest award given in science fiction, only one radio show has ever been nominated … yep, you guessed it, it was the Hitchhiker’s Guide to the Galaxy. HHGG was nominated in 1979 in the category “Best Dramatic Presentation,” but lost to Superman, staring Christopher Reeves.

In 1982, Adams became the first British author since Ian Fleming (you know, the guy who wrote Chitty Chitty Bang Bang … oh and all the James Bond novels, too) to have three books on the best-seller lists of both The New York Times and Publishers Weekly. This included Life, the Universe and Everything, which was in the top 11 for December of that year.

And Now For Some Interesting Tidbits Both Brazil and Twelve Monkeys were directed by Terry Gilliam, a member of the Monty Python gang. Adams was a big fan of Monty Python’s Flying Circus and even had an uncredited role in two episodes of the show in 1974 as Dr. Emile Koning, a surgeon.

Sandra Dickinson, who played Trillian in the TV Series, landed roles in Superman III (a rather horrible film) and Supergirl, creating another HHGG/Superman link.

Two years after Adams’ death, the annual DNA Memorial Lecture was founded. Each year, the Royal Institution in London hosts the lecture which raises money for some of Adams’ favorite charities, including The Dian Fossey Gorilla Fund and Save the Rhino International.

As yet, no one has been able to prove the theory that if you throw yourself at the Earth and miss, you’ll fly. But I’m sure that it could hurt quite a bit trying!