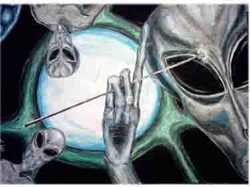 Have you ever wondered what it would be like to be abducted by aliens? Well, you might soon get your chance if Bryan Temmer, a Florida-based computer technician, gets his way. He wants to build an alien-themed amusement park in Roswell, N.M., and one of the attractions will be a thrill ride that simulates an alien abduction.

According to KOAT TV7 Albuquerque, Contour Entertainment, a company that has worked closely with Disney, Universal Studios, and Sony, has been contacted by the city to research and provide initial development plans.