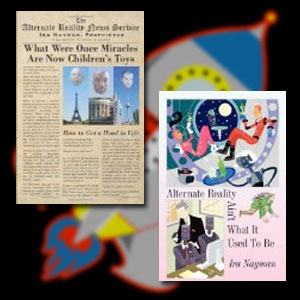 What if we could keep up with the news in alternate realities? Well, this week The Genre Traveler chats with Ira Nayman, creator of the Alternate Reality New Service, which does just that! In addition to getting the low down on the “news service,” we chat about Philip K. Dick, Terry Pratchett, humorous science fiction, his comic influences and science fiction as a suitable mask for socio-political commentary, as well as some advice for aspiring writers.

The Hulot films of Jacques Tati

The Enemy Papers by Barry B. Longyear

Moore’s Law
“A long-term trend in the history of computing hardware. The quantity of transistors that can be placed inexpensively on an integrated circuit has doubled approximately every two years. The trend has continued for more than half a century and is not expected to stop until 2015 or 2020 or later.”

For more information about Ira or the Alternate Reality News Service: