Podcast Episode 14: The Adventures of Alex Detail and His Author 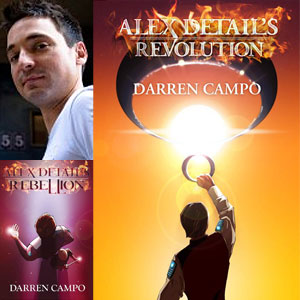 In episode 14, the last episode of 2010, The Genre Traveler chats with author (and TV producer) Darren Campo about his books in the Alex Detail series. Along the way we discuss the virtues of Pluto, colonizing Venus, utopian vs. dystopian science fiction, how working in television can help you write a novel, adding plausibility to your science fiction, the role (and importance) of collaboration in traditional publishing, the rise of the non-trilogy series and good writing habits. Darren also makes some good suggestions about books you might want to read for inspiration.

You can listen to a snippet here: www.youtube.com/watch?v=QDnQDyXKJpY

Pluto
First discovered in 1930 by Clyde W. Tombaough, Pluto was once considered the furthest planet from the sun. In 2006, the planet was demoted to “dwarf planet.”

Venus
Venus is the second planet from the sun and it’s bright spot in our sky is called both the Evening Star and the Morning Star.

Utopian vs. Dystopian Science Fiction
I wrote this short post about this topic in my Examiner.com column as the Long Beach Speculative Fiction Examiner.

The Shannara Series by Terry Brooks

For more information about Darren Campo: