Out of this World Exhibit Opens in Sacramento

Home | 1. Science Fiction • Attractions | Out of this World Exhibit Open … 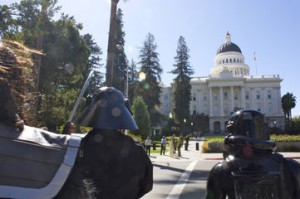 Yesterday, science fiction lovers dressed in movie-inspired SF costumes help launch the opening of The California Museum’s new sci-fi exhibit “Out of this World: Extraordinary Costumes from Film and Television,” which will run from this Saturday, Oct. 3, to Sunday, Jan. 10.

Proudly sporting their Klingon Bat’leths and evil empire helmets, and even a nice long Dr. Who scarf, a group of six local science fiction lovers marched from the California Museum down K Street and past the Capitol to Cesar Chavez Plaza in Sacramento as part of a promotion organized by the museum.

The exhibit features more than 50 props and costumes from some of Hollywood’s most memorable sci-fi films, including the Darth Vader robe and cape from Star Wars, the leather jacket worn by Harrison Ford in Indiana Jones and the hat worn by the Wicked Witch of the West in The Wizard of Oz.

The exhibit helps visitors learn how clothing designers and artists came up with ideas for the costumes and props, says Ashley Robinson, the California Museum’s communications manager.

“[By] putting sci-fi costumes in the same gallery space as the Lincoln exhibit, the museum will be able to reach people with different interests,” Robinson told the Sacramento Press. The exhibit is also for people who love movies or costume design in general, she added.

California Museum, Out of this World: Extraordinary Costumes from Film and Television