My husband recently got a copy of Disney’s Meet the Robinsons and we watched it the other night. I hadn’t heard good things about it, so I wasn’t really expecting much.

I was pleasantly surprised.

Meet the Robinsons, loosely based on William Joyce’s book A Day with Wilbur Robinson, is a sweet and tidy time-travel story. It opens up with a baby being left at the door step of an orphanage and then follows the child when he’s 12 years old and still looking for a family to adopt him.

Lewis is a boy genius and he’s just invented a device that will display memories of past events. He’s created it in the hopes of seeing his mother … so he can find her and have a family. 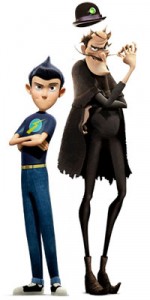 But a smart aleck kid and a mysterious man with a walking bowler hat take him on an amazing journey into the future where he learns about his destiny.

Along the way he makes friends with a bizarre cast of characters — a man who wears his cloths backwards, a butler who is in the shape of a one-eyed, giant, purple octopus, singing frogs and a man who delivers pizza as if the world depended on it.

The movie was cute, sweet and very entertaining. Oh, and it’s filled with homages to The Matrix, too, which was fun.

What was nice about it was that, although Lewis did change the past somewhat, he preserved the time line and all was well.

The story was well put together and I recommend this film as a fun way to spend some good-hearted movie time with the kids (or kids-at-heart).