Philip Palmer’s Hell Ship is raw, violent, expansive and emotionally charged. It is filled with colorful language … so, if you can’t take the F-bomb, don’t read this book. That said, it is a riveting read, pulling you through the story with raw emotions that are both familiar and strange. 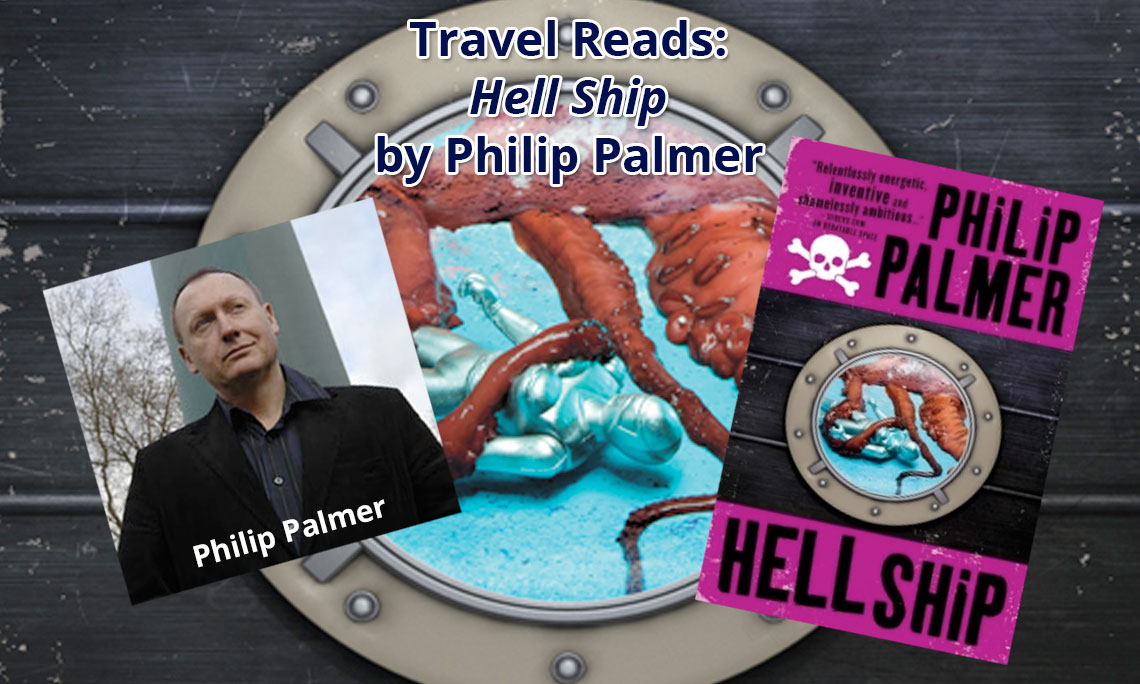 The remains of the Ka’un are bloodthirsty, rifting through space, jumping from one universe to another, waging war and destroying planets and universes … yes, entire universes … as they go. Traveling for eons in their death ship with an entire world inside, they have occasionally taken one single survivor from each destroyed world and added him or her to their collection of “slaves.”

Among the slaves is Sharrock, proud warrior of the Maxola. When his planet was destroyed, he was burned alive by volcanic lava, but then awoke within the Hell Ship. One of the Ka’un’s many advanced technologies is the ability to regenerate living creatures.

The slave that helps Sharrock come to terms with his new imprisonment is Sai-ias, a giant, squid-like creature who can swim through water, air and the vacuum of space, as well as slither upon the land. She comes from a peace-loving race evolved from a symbiotic race of protectors, so, when provoked, she can be a consummate killer.

The third protagonist is Jak, a one-time trader, now explorer. After the Hell Ship destroyed his universe and killed everyone on his ship, he fused his mind with the artificial intelligence of the ship, losing his body in the process, and becoming Jak/Explorer. They/he traverse the universes hunting for the Hell Ship, while documenting what they can of the millions of lost civilizations they find in its trail of death.

Hell Ship weaves the first-person stories of all three of these wildly different characters as they seek a way to destroy the Ka’un and their planet-destroying ship. But can they vanquish the Ka’un and put an end to their tyrannical death spree?

Also, this book is filled with amazingly colorful insults, from “bitch-with-a-withered-arsehole-that-stinks-of-death” to “soft-as-shit-expelled-from-my-bowels worm” … and even worse. These insults are sometimes flung with bile and at others a playful sign of affection. And they always do the trick.

Hell Ship is rich with a dizzying array of alien species and cultures, each alien and and yet familiar enough that you can see a kernel of the human experience in each and every one of them.

This story is like a space opera and spans thousands of years. There were times in the story I just wanted it to move forward and stop fussing around with character development. I think the story could have been tightened up just a little and been shorter. That said, I still enjoyed it.

With Hell Ship, Palmer weaves a rich, almost operatic tapestry of heroism, violence, lust, deception and good intentions having unexpected outcomes. Just when you think you know where the story is going, Palmer will switch gears and swing off in another direction. He keeps this up until the final page … you are never sure of how it will end until the last few paragraphs.

I found Hell Ship to be an engaging story, with rich, three-dimensional characters. The emotions, both intense and gentle, pull you through the story. The characters are accessible and relatable. Palmer quickly builds worlds that you can imagine, only to destroy them in a moment. When you finally reach the conclusion, you will be sad, happy and satisfied.

Score for Hell Ship: 4 Palm Trees out of 5 Possible