Fish Are Friends, Not Food 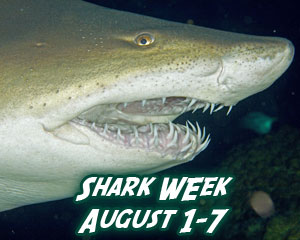 What is it about sharks that fascinates us so? Is it the empty stare? The robotic efficiency with which they kill? Is it some ancient memory of fear? I don’t know, but they sure are popular.

Theiss spent the better part of three years filming great white sharks off the coast of Baja, Mexico. His film, Island of the Great White Shark, documents the ongoing scientific research intended to secure their survival. “These are absolutely magnificent creatures living on a razorÃ¢â‚¬â„¢s edge of possible extinction,” says Theiss. “And there are some very dedicated people working tirelessly to prevent that.”

I have to admit, the shark exhibit I saw at the Monterey Bay Aquarium donkey years ago remains one of the most memorable exhibits I’ve seen. There was this really cool display that demonstrated a shark’s hearing ability. That’s when I realized that I truly can hear sounds that are in the higher range than the average person. But, I promise you, I’m no shark!

Did you know that great white sharks can go three months without eating? And that sharks become immobile when upside down? Not that I’d want to bump into a shark that hadn’t eaten for three months and try to turn it belly up. Yikes.

Here are a list of some genre films that feature sharks (listed in chronological, then alphabetical, order):

Thanks to Elasmodiver.com for doing much of the research for this list. You can find a list of shark documentaries there, too.