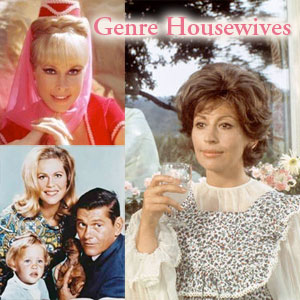 With November 3 being Housewife’s Day, also known as Retro Housewife’s Day, it got me to thinking how wives and mothers are portrayed in genre fiction. This, of course made me think of the 1975 classic film, The Stepford Wives (recently re-made in 2004 starring Nicole Kidman).

Filmed in various locations around Western Connecticut, The Stepford Wives was based on Ira Levin’s novel of the same name. Originally, he was going to write the story as a stage play but changed to novel once he realized it had too many characters.

The story tells of a small suburb where the women happily go about their housework – cleaning, doing laundry, and cooking gourmet meals – all to please their husbands. But, as a new arrival to the neighborhood finds out, these aren’t real women … they are actually domestic sex robots who have replaced the original wives.

A lot has been said about the symbolic subtext of the story and how it is an expression of the ongoing “war” between the sexes. So I won’t go into it here.

It tried to find other mentions of wives in science fiction, but there is more written about women … typically portrayed as vilainesses or damsels in distress … not much about domestic bliss or terror.

Of course, there is comedy television … I Dream of Jeannie with the “housewife” portrayed as fawning love-struck girl, and Bewitched, with the housewife portrayed as having to curb her power to keep up domestic bliss.

So … how do you feel about housewives? They certainly haven’t been treated with much respect in what I was able to find.

Locations from The Stepford Wives — all in Connecticut:

PS: Interesting to not that Nicole Kidman has portrayed a housewife in two of the remakes mentioned above: The Stepford Wives and Bewitched. I guess she just has that scary housewife look about her.