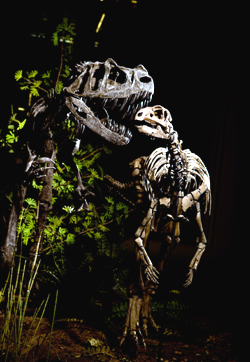 A new one-of-a-kind dinosaur exhibit is opening soon at the Carnegie Museum of Natural History in Pittsburgh, Pa. Dubbed “Dinosaurs in Their Time”, the exhibit is hailed as “the first permanent exhibit in the world to showcase dinosaurs in scientifically accurate, immersive environments spanning the Age of Dinosaurs.”

The exhibit, which opens to the public on Nov. 21, showcases dinosaurs in precise reconstructions of their ecosystems, interacting with their environments and the other animals and plants that lived alongside them.

“Visitors will get the feeling of literally stepping back in time and walking among the dinosaurs,” said Dr. Matt Lamanna, the museumÃ¢â‚¬â„¢s Assistant Curator of Vertebrate Paleontology, principle dinosaur researcher, and lead scientific adviser for Dinosaurs in Their Time. “WeÃ¢â‚¬â„¢ve painstakingly recreated the worlds of the dinosaurs, from the plants they ate and walked on to the animals that shared their respective ecosystems; everything that is displayed together actually lived together. This is the first time so many dinosaurs have been shown like this in a museum.”

The new permanent exhibit replaces the former Dinosaur Hall, which opened in 1907 and closed to the public in March 2005 to begin a massive $36 million renovation and expansion.

The Carnegie Museum of Natural History expect a visitor increase of approximately 40 percent (100,000 people) during the first six months Dinosaurs in Their Time is open. To minimize wait times, the museum has implemented a timed ticketing system. Furthermore, to allow visitors to bypass lines at the admissions desk, the museum offers advance ticket sales online at www.carnegieonline.org/cmnh/.