Shocktoberfest Let’s You Scare Your Friends 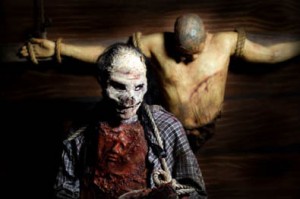 Got an Apple iPhone? Then you can be a part of the scary good fun at Shocktoberfest, Pennsylvania’s Premier Haunted Theme Park.

Two years ago, the part debuted the Text2ScreamTM technology and now they have extended the concept for the iScareYouTM program. Here’s how it works.

Let’s say you’ve just turned a blind corner in the line for The Toxic Asylum Haunted House andy you’ve been scared by the animatronic zombie prop that hides just out of sight there. Well, because this is a ScareZone, you can get in on the action and scare folks behind you in the line. At just the right moment, you press the “Boo Button” on your iPhone and lights flash and the zombie leaps into the air toward its victim.

“The iScareYou(TM) program,” says Patrick Konopelski, Executive Producer of Shocktoberfest, “engages our customers in a way never done before in the entertainment industry. It puts control in the hands of our customers.”

ScareZones with animated props can be found throughout the park. They are set up where customers least expect them and are designed so that once you’ve been scared, you can join in on the fun and scare others.

“There’s definitely an aspect of voyeurism here,” Konopelski says, “to give a customer the ability to scare the wits out of someone else through their cell phone is almost magical.”

The iScareYou(TM) system is powered by Aquicent Technology’s proprietary mobile technology platform. The system provides the end-user with a rich graphical user interface, and it integrates with the automated computer systems that run the Shocktoberfest attractions.

This year, Shocktoberfest celebrates their 15th year of operation. The attractions feature Hollywood-style computer-controlled special effects, and professional actors and set design. Haunted Attraction Magazine ranked it the #1 Must-See Haunted Attraction in the USA for 2009. Attractions include: The BioHazard Hayride, The Prison of the Dead, The Toxic Asylum 3D Extreme, The Monster Midway, and Club Shock.