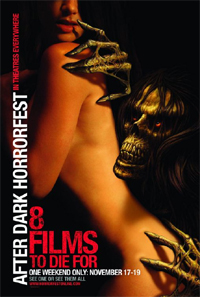 This year’s After Dark Horrorfest — 8 Films to Die For — will be held Nov. 9-18, 2007. What is the After Dark Horrorfest you say? Well, its kind of like a film festival that takes place in multiple theaters throughout the U.S. at the same time. Basically, for one week, you can go to a participating theater near you and see one or all 8 of these thrilling, scary films, often before they are released on DVD.

This year’s films include:

For more information and to purchase tickets, visit www.horrorfestonline.com.