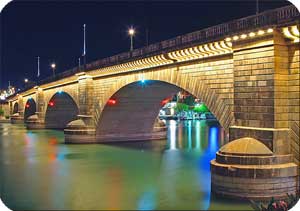 Many people generally associate ghostly happenings with older regions that have a lot of history. That said, they’d be surprised to find a “Ghost Tour” being lead at Lake Havasu City, a relatively young community, founded along the lower Colorado River in Arizona in 1964 by chainsaw magnate Robert P. McCulloch … except when they hear that the tours are of London Bridge.

London Bridge is steeped in history and Gary Asbury, paranormal researcher and operator of the London Bridge Ghost Tours believes that McCulloch got much more than just the granite stones when he purchased the bridge from the City of London. “There is a lot of residual energy that came with the bridge,” he said. “It’s residual energy; it’s not a haunting, spirit or visitation. It’s more like a piece of music on a loop. Granite is the best storage mechanism on the planet for that energy.”

Asbury’s tour tells of innumerable despondent Londoners who took their lives by jumping from the bridge into the River Thames. The bridge also withstood the blitzkrieg attacks during World War II, and some of its stones still bear the marks from that war. It all adds up to an active paranormal site, says to Asbury. “There were over 100,000 suicides off the bridge when it was in London, not to mention the bodies of executed criminals that were displayed on the bridge.”

In fact, London Bridge is an active site for paranormal researches who gather photographic and video evidence, as well as EVPs or Electronic Voice Phenomena. EVPs are believed by paranormal researchers to be voice recordings of spirits. The investigator will ask questions into the recorder and when it’s played back, sometimes voices will be present on the recording, when no one was there to give the answers.

“We were doing EVPs about three nights ago and we got this voice by the McCulloch statue that said ‘What are you doing?’ Then another one said ‘I forgive you.’ We did another one by the door at the beginning of the tour where a kid asked ‘Is there anybody in there?’ and a voice on the recording said ‘Me,’ but there was no one in the building,” said Asbury.

Believe it or not, Asbury claims that every tour results in something interesting. From guests who capture spirit energy in the form of “orbs” or “ecto” on their cameras, to others who feel spirits rushing by, he says many a skeptic has turned believer by the end of the tour.

“People love it when they go on the tour,” Asbury said. They’re able to bring their own recorders and cameras, take their pictures and collect their own EVPs. Then they examine their own pictures they know that the result isn’t photoshopped, they got something they know isn’t normal.”

Tours depart from the Asbury’s store, “The Dungeon”, at 8:30pm during the summer, 6:30pm during the winter and 7:30pm in the spring. More information can be found at www.sirgothic.com.