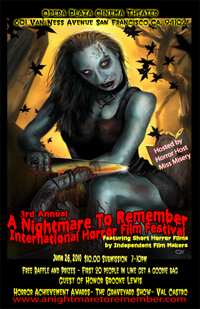 If you’ll be in San Francisco on June 26, you might want to check out “A Nightmare to Remember” San Francisco Horror Film Fest. In fact, if you can get there early enough to be among the first 20 through the door, you’ll also get a goodie bag.

The event takes place at 7pm at the Landmark Theatres Opera Plaza Cinema on Van Ness Ave. In addition to the screenings, there will also be special guests, including Tony Moran (the original Michael Myers from the Halloween film franchise) and Scream Queen Brooke Lewis (Slime City Massacre, Polycarp, The Drum Beats Twice).

Thanks to the Horror Happenings Examiner for giving me a heads up on this event.