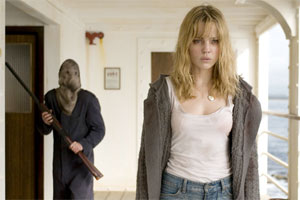 FILM4 FrightFest, the UK’s leading fantasy and horror film festival, has posted the schedule for the event, which will take place Aug. 27 through 31. With titles such as Zombie Women of Satan and Vampire Girl vs. Frankenstein Girl, how can you go wrong?

Actually, there are so many films — I counted more than 40 — I’m sure you could find one or two that you really liked. One that piques my interest is the remastered version of the 1981 film An American Werewolf in London. My college roommate introduced me to the film and I’ve always been drawn to its particular style of blending comedy and effects-heavy horror. Plus, I’ve always thought that Griffin Dunne was kinda cute. 🙂

This year, the event kicks off with a premiere of Triangle, directed by Chris Smith (Creep and Severance) and starring Melissa George (30 Days of Night). Here’s the IMDB description of the film:

“The story revolves around the passengers of a yachting trip in the Atlantic Ocean who, when struck by mysterious weather conditions, jump to another ship only to experience greater havoc on the open seas.”

Here’s a trailer for the film: