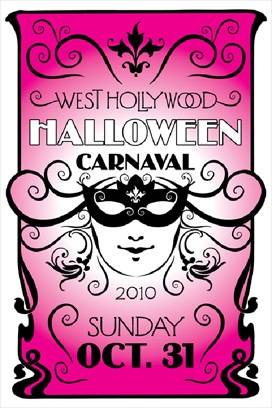 The 23rd annual West Hollywood Halloween Costume Carnaval is billing itself as the worldâ€™s largest Halloween street festival. And that may well be the cast if, on October 31, the expected “nearly half a million Halloween revelers” descend upon Santa Monica Blvd. to celebrate Halloween.

Making this year extra special, The Rocky Horror Picture Show 35th Anniversary will stop by for a one-off engagement. One of the stages of the event will be devoted to performances honoring this legendary cult film throughout the night.

The evening will kick off just before 7pm at corner of La Cienega & Santa Monica Boulevard with a parade including members of the Rocky Horror Picture Show cast, stage performers and city officials being transported in pedi?floats. The event will close out with a Guinness Book record-breaking performance of Time Warp synchronized across all six stages of the event.

To make room for the bash, the city will close Santa Monica Blvd. between Doheny Dr. and La Cienega Blvd. The Carnaval begins at 6 p.m. and ends at 11 p.m., but the party taking place in the bars along Santa Monica Boulevard will roll into the dead of night.

Spending some time in Los Angeles for the Halloween weekend? Here are some other activities you might be interested in, as well.

The Comedy Store
Friday, October 29
11:55pm
The Comedy Store is long-known as one of the most Haunted places in Hollywood. Get a behind the scenes look at all the creepy happenings, see the results of paranormal researchers and a live sÃ©ance, and hear firsthand accounts from Comedy Store staff of hauntings by “Gus” and “The Lady in White.” Plus view rare documentary footage about the hauntings and take a super scary flashlight tour of The Comedy Store.

Annual Doggy Costume Contest
Saturday, October 30
4pm
Hosted by The City of West Hollywood, this contest is held at West Hollywood Park. Winners receive prizes for a variety of categories including scariest costume; look-alike (pet and guardian); most creative costume; most colorful costume; and best costume.