Theatre Critics Weigh in On Lord of the Rings in Toronto

The Lord of the Rings officially opens in Toronto tomorrow and last week the news was flooded with professional opinions of the production. Since there is only one week left to sign up for the Exclusive Behind-the-Scenes Tour of World Premiere Lord of the Rings Musical, I thought you’d like to see what people are saying. Here are some links to stories about the musical. 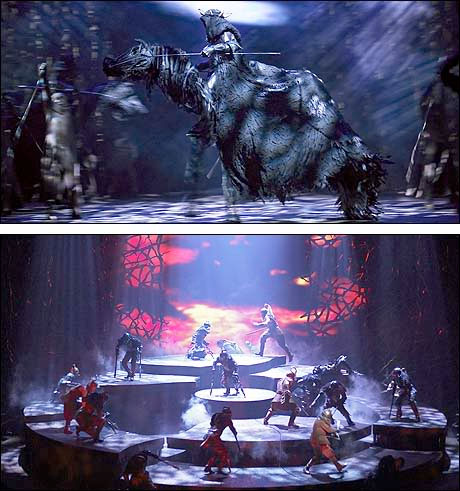 On stage: Lord Of The Rings is a ‘world of wonder’, XTRA!
A feature about Tony Award-winner Brent Carver, who plays Gandalf.

‘Lord of the Rings’ Takes the Stage, NPR
Jeff Lunden’s take on the production. Includes images and a sound file, along with links to other related NPR stories.

PHOTO CALL: Lord of the Rings Takes Over Toronto, Playbill
Cool images from the production.

Lasting magic or a puff of smoke?, Los Angeles Times
Patrick Pacheco’s take on the production.

Bloggers weigh in on LOTR musical while pro critics wait for opening night, Canada.com
A roundup of what non-professional theatre critics are saying about the production in their blogs.

Gollum gosh, the hills are alive with hobbits
“A musical version of The Lord of the Rings is an Ent-sized gamble, writes Paul French.”

Ringing the changes
Warning: this page may take a little while to load.
Guy Dammann’s view, as posted on the Culture Vulture Blog

Into the fire
More from The Los Angeles Times

The Ring Sings, Time
“J.R.R. Tolkien’s saga soared as a book and a movie. Now it has inspired the most expensive stage musical of all time”

A Revitalized Toronto Pins Its Hopes on the Hobbits, The New York Times
By Susan Catto

‘Rings’ moves to center stage, USA Today
By Elysa Gardner, “Move over, The Lion King. Another epic adaptation is nipping at your heels — one even longer and more commercially extravagant.”

Feet of all shapes and sizes in motion, Toronto Star
Choreographer mixes hobbits’ big hairy toes with stilt-walking giants in battles and dance