Step Into the Wizarding World 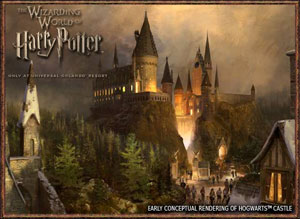 Would you like to release your muggle coil and experience the world of wizardry? Well, soon you’ll be able to do just that.

Warner Bros. has teamed up with Universal Studios to create a theme park based on the Harry Potter movie series. Touted as the real life version of the magical world of Hogwarts, the Wizarding World of Harry Potter will is scheduled to open next spring at the Universal’s Islands of Adventure in Orlando, Florida.

The centerpiece of the new 20-acre attraction is a lavish recreation of Hogwarts Castle. Rides will include the ‘Dragon Challenge’, a high-speed roller coaster themed after the ‘Triwizard Tournament’ and a family roller coaster called ‘Flight of the Hippogriff,’ named after a creature with an eagle’s head and a horse’s body.

The opening of the theme park is planned to coincide with the Harry Potter and the Deathly Hallows movie.

Want a sneak peak at the park? Check out this video: http://www.universalorlandoresort.com/harrypotter/first_look_uo.html.

2 comments on “Step Into the Wizarding World”