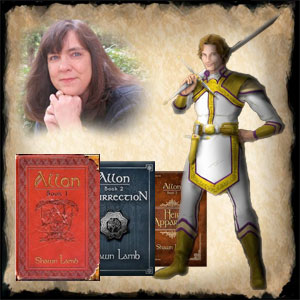 Join The Genre Traveler as she chats with Shawn Lamb, author of the young adult fantasy series Allon. The series was instigated by a request from Shawn’s daughter, but grew into much more as the diverse array of neighborhood kids got in on the fun. During the conversation we touch on the cultural questions teens from other countries have when exposed to American High School culture, making the transition from historical fiction to fantasy, writing for BraveStarr at Filmation Studios, age appropriateness of stories, the benefits of having a good understanding of history and more.

BraveStarr
This animated space Western aired from September 1987 to February 1988. It was the last animated series produced by Filmation and Group W Productions that was broadcast. The idea for the show started in 1984 when Filmation was working on the animated Ghostbusters. The staff created a character called Tex Hex. Lou Scheimer, one of the original founders of Filmation, found the character fascinating and pulled him from the Ghostbusters cast and asked Arthur Nadel, Filmation’s Vice President for Creative Affairs, and art director John Grusd to develop a SF western around the character. What resulted was BraveStarr and Tex Hex was his chief adversary.

For more information about Shawn Lamb:

Photos from my trip to Romania are available on The Genre Traveler Facebook page.