Podcast Episode 34: The Episode That Shall Not Be Named 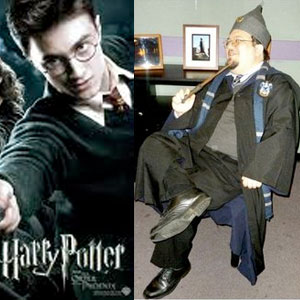 Jonathon Rosenthal, the head organizer of The Group That Shall Not Be Named chats with The Genre Traveler about Harry Potter fandom. Along the way we discuss what the group does at meetings, Muggle Quidditch, how Harry Potter fandom is becoming a part of the culture, the literary value of the Harry Potter books, secret crushes on Severus Snape (mine), where does HP fandom go after the movies end, and more.

NOTE: This episode was recorded in March, when The Family Channel was airing a Harry Potter Marathon and broadcasting a sneak peak of Harry Potter and the Deathly Hallows, Part 2.

Muggle Quidditch in the News

In 2010 the IQA changed its name to the International Quidditch Association and became a registered nonprofit organization. Today the IQA comprises the Commissioner and President, Alex Benepe, and college volunteers making up the Board of Directors, seven Regional Directors and a dozen Regional Correspondents who work together to network and coordinate matches between schools around the country.

The IQA serves to promote Quidditch as a new sport and lead outreach programs to increase athletic participation among children and young adults and bring magic to communities.

King’s Cross Station
King’s Cross Station, opened on October 14, 1852, is considered one of the main train stations to serve London. It serves as a major intercity and commuter rail hub for folks (muggles) going to North London or Yorkshire and the North East and Scotland. Students of Hogwarts School of Witchcraft and Wizardry take the Hogwarts Express to Hogwarts from Platform 9¾.

Death Eaters/Sin Eaters
I mis-remembered the term. It was not “death eater” that I was thinking of, but “sin eater.” The tradition of the sin eater comes from pre-20th-century England, Ireland, Wales and India. A sin eater performed a ceremony where they ate bread and salt from the chest of the deceased to take on their sins. This allowed the deceases to enter heaven with a lighter burden of sin. Of course, sin eaters were generally shunned by society, living beyond the edge of respectability, because of all the sins they accumulated due to their work.

Harry Potter Scholarship
As with many literary works, the Harry Potter books have been studied in a scholarly manner. Some of the better known are John Granger, Travis Prinzi and Gwendolyn Limbach. Here are a few of the Harry Potter research books you can find on Amazon.com.

Potter Puppet Pals
The first movie came out in 2001. The earliest Potter Puppet Pals movie I could find a date for was 2006. This does not definitively contradict what Rosenthal said in the podcast, but it does suggest the movies came first.

Rock bands that write and perform songs about Harry Potter fandom. The genre developed somewhere between 2002 and 2004, initially in Massachusetts with Harry and the Potters. It has since grown and become an international phenomena. Although most listeners of Wizard Rock are Harry Potter fans, some bands have attracted listeners outside of the HP universe fanbase.

Wizard Rock is a type of filk music. Filk is a musical culture that grew out of science fiction and fantasy fandom. The genre developed sometime in the early 1950s.

For more information about The Group That Shall Not Be Named: