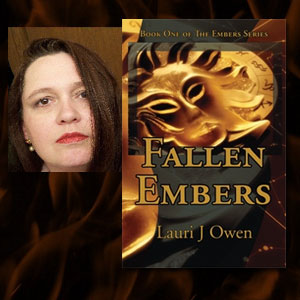 The Genre Traveler chats with Lauri Owen about her Embers series of novels set in an alternate Alaska where decadent mages rule and shape-shifters, indigenous to the land, are their slaves. Topics we touch on include the rural nature of Alaska, the nature of villains, good vs. bad in a cultural context and the advantages of writing fantasy.

Thomas Covenant is a bitter, cynical writer afflicted with leprosy and shunned by society. But he is magically transported to The Land where he is destined to be the heroic savior, battling against the evil Lord Foul. He is a reluctant and flawed hero (he rapes one character), but still ends up fulfilling his destiny.

The Yupik people of Alaska

This indigenous folk of western, southwestern, and south-central Alaska, as well as the Russian Far East, are Eskimos related to the Inuits. Traditionally, salmon and seal make up their primary protein sources. The Yupik are unique among native peoples of the Americas in that children are named after the last person in the community to have died.

The Picture of Dorian Gray by Oscar Wilde
First published in Lippincott’s Monthly Magazine in 1890, Wilde later revised and expanded the story for the novel version published by Ward, Lock and Company in 1891.

For more information about Lauri Owen