Growing up, I absolutely loved the Sinbad movies. From The 7th Voyage of Sinbad (1958) to the follow up films in the 1970s, The Golden Voyage of Sinbad and Sinbad and the Eye of the Tiger. In fact, I actually made money drawing eyes on the palms of my classmates when I was in elementary school. (It never ceases to amaze me what people will pay for!)

Anyway, I’m sure you can imagine how excited I am to hear that the story of my favorite tight-pant wearing hero is going to continue now that Morningside Entertainment has optioned Bluewater Productions Sinbad: Rogue of Mars to adapt into an epic action adventure fantasy feature for 2012. 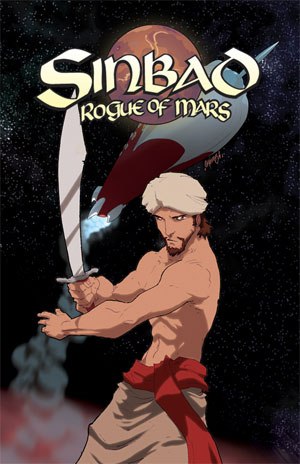 Rogue of Mars is an updated sequel rather than a reboot. In fact, according to Executive Producer Barry Schneer, this film is the first of a planned new trilogy that will bring Sinbad to a whole new generation while still showing respect to the original fans.

â€œI am thrilled to continue the amazing legacy my uncle, Charles Schneer began with 7th Voyage,” said Schneer, “and bring to the screen the Sinbad movie that he and Ray Harryhausen never got to make.â€

In his 4th film adventure, Sinbad and his crew find a magical urn and are soon transported to another planet by a ruthless and vengeful djinn. You see, this djinn wants to free his race, who have been imprisoned for millennia, and then lay waste to the ones responsible.

â€œSinbad has always been one of more popular titles in our library,” says Darren G. Davis, Publisher of Bluewater Productions. This library also includes Wrath of the Titans and Jason and the Argonauts. Sinbad â€œcertainly lends itself to a big-budget tentpole movie,â€ Davis added.

Bluewater Production’s Graphic Novel Sinbad: Rogue of Mars will be available in April of this year through traditional retail outlets, as well as several online venues including Amazon.com and Barnes & Noble.

Founded in 1957, Morningside Entertainment became the first film company to produce and distribute stop-motion animated fantasy movies. Its founder, Charles Schneer, began his film career by studying at Columbia University in New York before serving in the US Army’s Signal Corps Photographic Unit. After the war, he moved to Hollywood and joined Columbia Pictures. 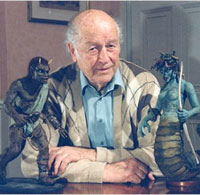 Noted sculptor and special effects creator Ray Harryhausen was Schneer’s partner in the business. The two were introduced by a mutual friend from Schneer’s Army days. Harryhausen’s two most acclaimed films are The 7th Voyage of Sinbad (his first color film) and Jason and the Argonauts, featuring a famous sword fight against seven skeleton warriors. His last film was Clash of the Titans, produced in the early 1980s. Recently, he was involved in producing colorized DVD versions of three of his classic Morningside films, 20 Million Miles to Earth, Earth vs. the Flying Saucers, and It Came from Beneath the Sea.