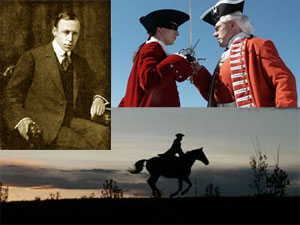 Say What? Yeah, I know that almost sounds like a sacrilegious act — inviting movie stars to a literary convention — but I promise there is at least a tenuous reason for MileHiCon, the largest Science-Fiction Literary Convention in the Rocky Mountain Region, to do such a thing.

As it turns out, once upon a time, Alfred Noyes, an English poet, wrote a poem called “The Highwayman” about a highwayman’s visit to see the beautiful Bess at the old inn and the terrible fate they both meet. The poem ends mysteriously, suggesting that the lovers’ spirits still linger on the edge of the heath.

Now, actor Trygve Lode is making his directorial debut and bringing his take on the poem to the big screen, starring Macleish Day, Tom Doyle, Adrian Hart and Don Kraus — all who will all be making an appearance at MileHiCon this coming weekend, along with producer Darlene Cypser. The film is set to come out next year.

This modern version of The Highwayman is a historical action/adventure movie based on well-known poem and centers on a young man in 18th century England named Will Stiles. To exact his revenge on those who wronged his family, he becomes a highwayman … and continues his quest even after death.

The movie began principal photography in Colorado on Sept. 4, with a 3 day shoot at the Colorado Governor’s mansion. Later in September a scene was shot with Martin Kove (Kiss of the Vampire, Sting of the Black Scorpion and Karate Kid) as Roan Blackthorn, a blacksmith who refuses to give Will Stiles work, an act which drives Will toward becoming a highwayman.

The presentation at MileHiCon will take place on Oct. 24 at noon and will include a panel with cast and crew members and a sneak preview of scenes from the movie.

Another reason to hold the panel … the lead actor, Macleish, is a Boulder native. Macleish is well-known locally for his work in musical theater. He was featured as Sir Evelyn Oakleigh in sold out shows of Anything Goes and as Slim in Oklahoma! with the Colorado Light Opera during the summer of 2009. His performance as J. Pierrepont Finch in How to Succeed at Business Without Really Trying in the summer of 2008 with the Colorado Light Opera was highly praised by the Daily Camera. But Macleish has also been acting in feature films including Spectrauma (due out next year), Serotonin Rising and ER Experience.

Lode is known to audiences for a number of roles in front of the camera, including as the mad scientist Therion in the martial arts action movie, Dragon and the Hawk, and as the man-turned-monster in the creature-feature, The Shadow Walkers. In The Highwayman, Trygve also plays Lt. Cardwell, an infantry lieutenant who is charged with the task of hunting down the highwayman a task which turns out to be more difficult than he bargained for.