Do you enjoy going to genre conventions?

Do you get a kick out of visiting places where your favorite genre movies or TV shows were shot?

Do you delight is visiting places where your favorite genre authors lived, wrote or set their stories in?

Then The Genre Traveler is for you!

The Genre Traveler is your online resource for helping you do all these things … and more. It is a blog for those who see the world through genre-colored glasses.

So what will you find here?

Topics covered at The Genre Traveler include, but are not limited to:

Who is the “mastermind” behind The Genre Traveler? 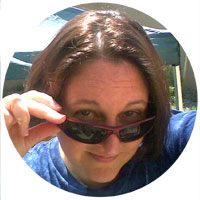 The Genre Traveler is the brain child of Carma Spence, a long-time science fiction and fantasy fan, who has added horror to her list of “geeky” interests.

Carma has more than 20 years of marketing communications experience, as well as a Master’s degree in Journalism. She’s dabbled in fiction and poetry since the tender age of four.

She first conceived the idea for The Genre Traveler in 2004 while taking a travel writing correspondence course. It was then that she realized two things:

And so, The Genre Traveler was born, initially as a quarterly PDF magazine. In 2005, Carma changed the format and platform to WordPress … acknowledging two things … the overwhelming time-suck the PDF magazine was with little return on time invested and the more urgent, flexible and easily updatable qualities of a blog site.

That accomplished, Carma is now focusing on building up The Genre Traveler brand and hopes to transform it into a multi-media business, with video (could a TV show on SyFy be far off?), audio and much more robust content. A searchable database of venues and events is (and has been for a few years now) on the wish list for The Genre Traveler.

Favorite Movies: The Princess Bride, The Terminator, Enemy Mine

When Carma met Clancy Brown at a convention, she told him he played her favorite character on Earth 2. His response was pretty much to talk her into what a terrible person that character was.

Clancy: Why?
Carma: Because he’s such a good father.
Clancy: No he’s not….

Carma once interviewed Pierce Brosnan at his request! He was shooting a fund-raising video for City of Hope National Medical Center, where she was the employee newsletter editor. A co-worker introduced Carma to Pierce and during the conversation he said, “Would you like to interview me?” Of course she said yes!

Two pictures were taken during that interview, without her knowing. One with her mouth open, the other with his. She shared those pictures in one of the early PDF issues of The Genre Traveler.

Carma’s first remembered experience with science fiction was when she walked into the TV room where her father was watching Star Trek. She was five years old.

Carma saw the first Star Wars movie in the theater three times – the second time as part of her 11th birthday celebration, the third time in a large screen theater in San Francisco with her mother.

Star Wars the first movie she ever saw in the theater more than once and the only English language film she has seen in a theater more than once. Since that time, the only other movies she’s made repeated trips to the theater for are Akira Kurosawa’s Ran (one of that director’s early works inspired Lucas when he was creating Star Wars) and Twilight of the Cockroaches, an anime/live-action film. Both of these latter films were in Japanese. Carma does not speak Japanese … she just likes the way it sounds.

Carma is a big fan of the Starman movies. Originally known as “Super Giant” in Japan, they feature the Japanese equivalent of Superman. She believes that Starman was her first crush on a human (before that it was cartoons.) Starman is played by Ken Utsui, who was born the same year as Carma’s father.

Both her parents played a pivotal role in developing Carma’s growing interest in genre fiction. Her dad introduced her to Star Trek, Isaac Asimov and Ray Bradbury. Her mother introduced her to Ursula LeGuin (The Earthsea Trilogy) and Stephen R. Donaldson (The Thomas Covenant, The Unbeliever series). Carma’s interest in horror, although nascent since childhood, truly started to develop when she took “Gothic Imagination in Literature and Film” while attending the University of California, Santa Cruz as an undergraduate.

Interesting side note: Brannon Braga, who eventually worked on the re-incarnations of Star Trek is also an alumni of UCSC. When she told him that at a convention in Washington, DC, circa 1993, he seemed quite interested in continuing the “memory lane” chat. But the line was too long and she was there with a very annoying young man named, get this, Jim, she’d “picked up” at a bar the week before. Erg.

Many of the locations where Alfred Hitchcock shot The Birds are located in Carma’s home county of Sonoma. In fact, Carma has attended services, on several occasions, at the church that appeared in the movie. The school scene was shot nearby. When she was young, Carma and her family spent quite a bit of time hanging out in Bodega Bay, where the town exteriors were shot.