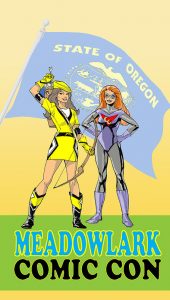 Meadowlark Comic Con, a full-scale pop culture and comic convention, comes to Ramada Medford Hotel and Convention Center and brings an array of celebrity guests from different genres of entertainment.

Rogue Valley fans will have a rare opportunity to meet Mindy Sterling, known for her role as Frau Farbissina on Austin Powers: The Spy Who Shagged Me, Austin Powers in Goldmember and Austin Powers: International Man of Mystery. Mindy Sterling’s film and television credits also include Friends, How the Grinch Stole Christmas, Justice League Unlimited, Curb Your Enthusiasm, Robot Chicken, Desperate Housewives, iCarly, The Legend of Korra, Minions, Voltron, and her Emmy-nominated performances in Con Man and Secs and Execs.

Also appearing at Meadowlark Comic Con are Alison MacInnis (Pink Ranger) and Sasha Craig (Yellow Ranger) from Power Rangers Lightspeed Rescue, as well as Jackey Neyman Jones who starred in the cult classic that many label as the ‘worst movie ever made’ — Manos: The Hands of Fate.

No convention is a comic con without professional Marvel and DC artists, and Meadowlark Comic Con has their comic book aficionados covered: Chris Marrinan who worked on classic titles like Excalibur, Wonder Woman, Nova, Doctor Strange, and Matt Haley whose credits include The Defenders, Superman, Wonder Woman ’77, will be at the show to meet their fans, sign autographs and do sketches and commissions.

Attendees will also be able to shop from various exhibitors and creators, play video games, meet local cosplayers and fan groups, attend celebrity guest panels, and compete in a cosplay contest for a trophy and a cash prize.