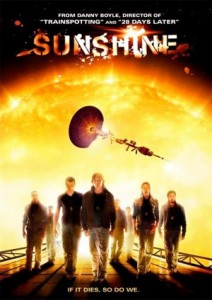 Earlier this week SyFy aired Sunshine, the 2007 film, written by Alex Garland and directed by Danny Boyle (both worked on 28 Days Later), about a group of astronauts on a mission to re-ignite the dying sun. I remember when it first came out it had a bit of fan fare and then just seemed to peter out. But I TiVo’d it anyway, primarily because Hiroyuki Sanada (The Last Samurai, Speed Racer) was in it and I’ve gained a renewed interest in his work because he’s currently on Lost, playing the temple guardian, Dogen.

I must admit that I was a bit disappointed to find Sanada had hardly any lines in the film and was killed off barely halfway through. Erg.

But that’s O.K. I continued to watch out of curiosity and, the movie also had another favorite actor of mine, Michelle Yeoh (The Mummy: Tomb of the Dragon Emperor, Tomorrow Never Dies). I’ve always loved the grounded energy she brings to her roles.

The basic plot of of the film is this: 50 years in the future, our sun is dying and the Earth has been plunged into a new glacial period. A first mission to re-ignite the sun, Icarus, disappeared. So now eight astronauts on Icarus II are just about to enter the “no comm” zone on their attempt to deliver an atomic bomb into the sun. The hope is that the bomb will cause a mini-supernova and kick-start the sun again, saving everyone on Earth.

As they enter the point where communication to Earth will be cut off, they hear a distress signal coming from the original Icarus mission. Did they survive? Should they continue with the mission or rendezvous with the Icarus to see if they can save any survivors? It’s been a little more than six years since the first mission disappeared … so the likelihood that anyone survived is pretty small.

After much contention, they decide to alter course … but in doing so a miscalculation causes damage to their solar shield and from that moment on their mission faces one challenge after another.

Over all, the pace of the film was rather slow. I believe it was meant to be more of a psychological thriller, but I don’t think it succeeded there either. The tension was never fully built, the imagery was often confusing, and the dialog too often came off disjointed.

Cillian Murphy (Batman Begins, 28 Days Later) as Cappa, who’s blend of masculine and feminine good looks makes him fascinating to watch, was pretty much the star of the film. Although, ostensibly, Cliff Curtis (10,000 BC, Virus), as Searle, the creator of the bomb, really should have been.

Searle opens up the film with introductory dialog and introduces the underlying spiritual theme of the film. But it is Cappa who, as the physicist on the crew, makes most of the decisions about how to complete the mission, and he’s also the one who finally gets the job done — even after a surprise twist happens when they dock with the Icarus.

Although, I do have to say that Chris Evans‘ (Fantastic Four, Fantastic Four: Rise of the Silver Surfer) strong performance as Mace gives Murphy a good run for the money. Mace is opinionated and aggressive/assertive … but is goal is heroic: save the Earth despite the sacrifices required.

Sunshine was interesting and, at times beautiful, but I can’t really say I’d recommend it. It’s quest for mood made it slow moving, and the slow pace seemed to sabotage both story and character development. I think the concept was sound by something fell apart along the way to the final cut. I found myself having to back up often, just to re-look at something I didn’t get the first time. I also fidgeted … something I only do if I’m not completely riveted by the film.