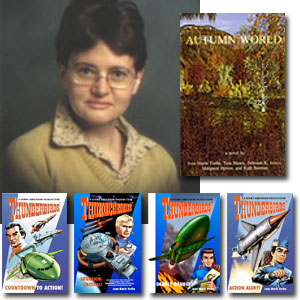 Host Carma Spence chats with Thunderbirds novelist Joan Marie Verba about how she became a fiction writer and got involved in the series of media tie-in novels based on the 1960s British marionette TV show, Thunderbirds. The conversation also touches on her first book, which covered the discoveries made by Voyager, her first novel, Autumn World, being awarded the Mom’s Choice Award and writing in someone else’s universe (media tie-ins).

NOTE: This episode was recorded in 2010.

Great piece of advice: If you’re writing a media tie-in novel, you need to be in love with that universe. If you aren’t, the readers will know.