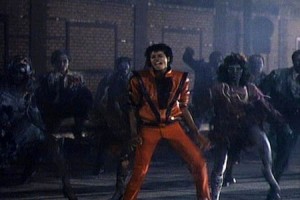 At first I thought it was a fluke. But now I realize it is a trend. Horror stories just aren’t safe from song and dance anymore. And I’m not just talking Michael Jackson’s Thriller video. Here is a somewhat comprehensive list of horror musicals. If you know of any I missed, please add them in a comment. (I put them in alphabetical order because there have been several versions of some of these.)

Carrie
Apparently, some horror stories just don’t translate well into a musical. With music composed by Michael Gore of Fame and Dean Pitchford of Footloose combined with a script by Lawrence D. Cohen (who wrote the 1976 film script), you’d think you might have a winner. However, many believe that this was the biggest Broadway flop of all time. That said, there are others who want to revive the show.

Creature: The Musical
I mentioned this in a previous post: The Creature Dances

Dead & Breakfast
The tagline for this 2004 film was “It’s like a bad horror movie … only worse.” An evil spirit possesses small town folk and terrorizes six friends who wanted a simple vacation at a county bed and breakfast. You’ll probably recognize some of the stars: David Carradine (once the star of the TV show Kung Fu, now the star of a string of really bad movies); Portia de Rossi (now stars in Better Off Ted, but has been horror before: Stigmata and Wes Craven’s Cursed, as well as cult TV favorites Arrested Development and Nip/Tuck); and Jeffrey Dean Morgan (he starred in one of my favorite canceled TV shows, Hot Zone, and more recently played recurring roles in Grey’s Anatomy and Supernatural).

Evil Dead: The Musical
Yep, you guessed it, Sam Raimi’s cult classic film has been made into a musical. It premiered in Canada and then moved on to Korea. There are productions either planned or in talks for Norfolk, Va; Cleveland, Oh; Charlotte, NC, and Grapevine, Texas, for this year. There might even be a 3D movie version of the musical in the works, according to Wikipedia. If you’d like to hear a sample song, visit the official website at http://www.evildeadthemusical.com.

Jekyll & Hyde: The Musical
When I first read Robert Louis Stevenson’s 1886 novella “The Strange Case of Dr. Jekyll and Mr. Hyde,” I found it boring. You see, if you already know that Mr. Hyde is Dr. Jekyll, there is no mystery to the novel. It was written in a way that that was the big surprise. However, countless stories and movies have taken that work and made it interesting … even if you know the surprise. Originally produced in 1990, the musical version, with book and lyrics by Leslie Bricusse and music by Frank Wildhorn, of the story became quite a success. The original run was extended four times and in 1997 it made it’s Broadway debut and was nominated for 4 Tony Awards — two of which it won.

Little Shop of Horrors
This is probably the one that most often comes to mind when I think of horror musicals. What’s more frightening than a singing sadistic dentist? Oh, yeah, and then there’s that giant alien plant that likes to eat people.

Meathook: A Melodrama
One writer said this of Meathook: “Insanity, illicit sex, oedipal oddities, serial murder, mutilation, cannibalism, marijuana use and a bear trap that administers poison are all somehow much merrier when people can sing about them.” This musical centers around an experimental psychologist who is an underappreciated genious taking liberties with an adoring student, as well as escaped homicidal maniac running amok in the woods.

The Nightmare Before Christmas
O.K. This one is less about horror than some of the others, but is infused with Tim Burton’s dark sensibilities.

Once More with Feeling (Buffy the Vampire Slayer episode)
When Buffy was dragged back from the dead, there was something different about her. Turns out, she was dragged from heaven. But you won’t learn that until the end of this experimental episode that had the entire town of Sunnydale singing and dancing. I actually own the soundtrack … the numbers were quite good! Good going Joss Whedon.

The Phantom of the Opera
When Andrew Lloyd Webber got ahold of this classic horror tale, he made art … and one of the longest standing Broadway musicals around.

The Phantom of the Paradise
Written and directed by Brian De Palma, this 1974 horror-thriller-comedy musical film was initially a box office failure and panned by some critics. However, it went on to be nominated for an Oscar and Golden Globe and has since gained a cult following.

Repo! The Genetic Opera
Directed by Darren Lynn Bousman and premiering in movie theatres on Nov. 7, 2008, this musical asks the question, “What happens when an organ recipient can’t pay for the transplant on time?”

The story takes place in the future after a global epidemic of organ failures. A multibillion-dollar company that specializes in organ transplants, GeneCo, comes to the rescue … but with a price: when a client doesn’t pay the bill on time, the Repo Man comes along to collect the donated organs.

Rocky Horror Picture Show
Alien zombies, transvestite vampires and some really campy musical numbers made this low-budget musical a cult favorite. Heck, even Meatloaf got into the act!

Silence of the Lambs: The Musical
Years ago I first heard about this concept and never thought it would make to the stage. I guess it was a head of its time: http://www.silencethemusicallive.com/

Sweeny Todd
When I was in college, my roommake couldn’t say more than enough about this musical. I finally caught Tim Burton’s version last month and can see why. This tale has young love, twisted revenge and plenty of spurting blood to make anyone roll in their seats with laughter.

The Toxic Avenger: The Musical
This currently on Broadway musical is based on the series of films about the haz-mat victim turned hero in Tromaville.

Young Frankenstein: The Musical
If you loved the film, you’ll love the musical! Mel Brooks is experience quite a resurgence of success taking his old films and re-packaging them as theatrical musicals. Riding on the successful coattails of The Producers, Brooks Launched Young Frankenstein and is smiling all the way to the bank.