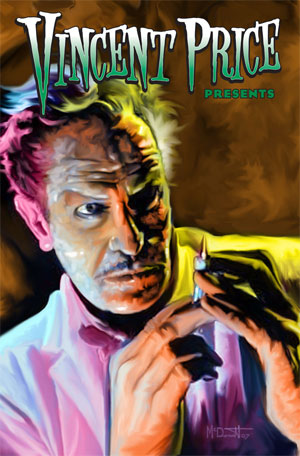 May 27, 2011, marks the 100th anniversary of the horror icon Vincent Price‘s birth. For more than two generations the revered actor provided spine tingling thrills with his unforgettable on-screen roles in such films as House of Wax (1953), The Fly (1958) and House on Haunted Hill (1959).

In honor of this centennial, Bluewater Comics, the publishers of the ‘Vincent Price Presents’ series of comics and graphic novels, in partnership with the Price estate, will be releasing a slate of titles dedicated to and featuring the master of the macabre.

“‘Vincent Price Presents’ has been one of Bluewater’s most popular, well-received and longest-running titles,” said Bluewater president Darren Davis, “It proves Mr. Price has an enduring legacy. We are thrilled to pay homage to a Hollywood legend and be part of this celebration.”

The title first appeared on Halloween of 2008. It incorporates the likeness of the late actor in each issue; sometimes as a narrator, sometimes as a character. Several of Price’s iconic roles have been revisited during the run of the comic book series.

The series also included several Poe reinterpretations including ‘Pit and the Pendulum’ which was also a 1961 Roger Corman film production starring Price. Most of the comic book series includes new and original tales of fear, suspense and the supernatural written by a variety of established comic book authors and illustrated by a stable of artists.

In May, Bluewater will be releasing three separate titles including Vincent Price Presents #31, a second volume graphic novel compiling some earlier issues, and a biography comic book. An omnibus edition containing the first 25 issues of the horror anthology series bearing Price’s name will be available in July.

In addition, Colonial Radio Theatre is developing an ongoing series of Radio Drama’s based off the comic book series. The programs will air on Sirius/XM radio. They started airing last Halloween and will continue through 2011. Also in 2011, a Vincent Price action figure based on the comic book series will be made available by Executive Replicas.